Globally, the median public expenditure on education was 4.4% of gross domestic product (GDP) and 13.8% of total government expenditure in 2018, compared with the 4% and 15% thresholds agreed in the Education 2030 Framework for Action. In all, 47 of 141 countries with data, or one-third, met neither benchmark – 4 more than the previous year, with 7 fewer countries reporting. Because the set of countries reporting expenditure data changes yearly, consistent time series require imputation. In 2000–18, education spending as a share of GDP has remained stagnant, though this masks considerable regional variation, from 1.7 percentage points higher in Latin America and the Caribbean to 0.5 percentage points lower in Northern Africa and Western Asia.

Aid levels have remained constant at around 0.3% of major donor countries’ gross national income since 2005. During this time, aid as a share of GDP in low-income countries has been falling, reaching 7.9% in 2014, rebounding to 9.1% by 2018. Aid to education reached US$15.6 billion in 2018, a historic high. But at most 47% of that amount, or US$7.4 billion, goes to basic and secondary education and to low-and lower-middle-income countries, which are most in need. Humanitarian aid to education has quintupled between 2012 and 2019 to US$705 million.

The OECD is changing its definition and methodology for calculating aid. The new Total Official Support for Sustainable Development is expected to have several implications for education. New codes for multilateral mechanisms, such as the Global Partnership for Education, will reduce the proportion of aid to education previously unallocated to countries. Sector-level information will be provided for humanitarian aid. Contributions to global public goods, policy advisory services and research efforts will also be singled out. Only the grant portion of concessional loans will count as aid.

The poorer the country, the larger the share of household expenditure on education. Data from a small number of countries indicate that the median was 0.5% of GDP in Europe and Northern America but 1.9% in sub-Saharan Africa. Household spending often makes up for insufficient government spending: In six of nine countries where households spent at least 2.5% of GDP on education, governments spent below 4%. Households may display gender bias in expenditure on sons and daughters, although the extent varies by context.

FIGURE 7: Latin America and the Caribbean recorded the largest increase in education expenditure 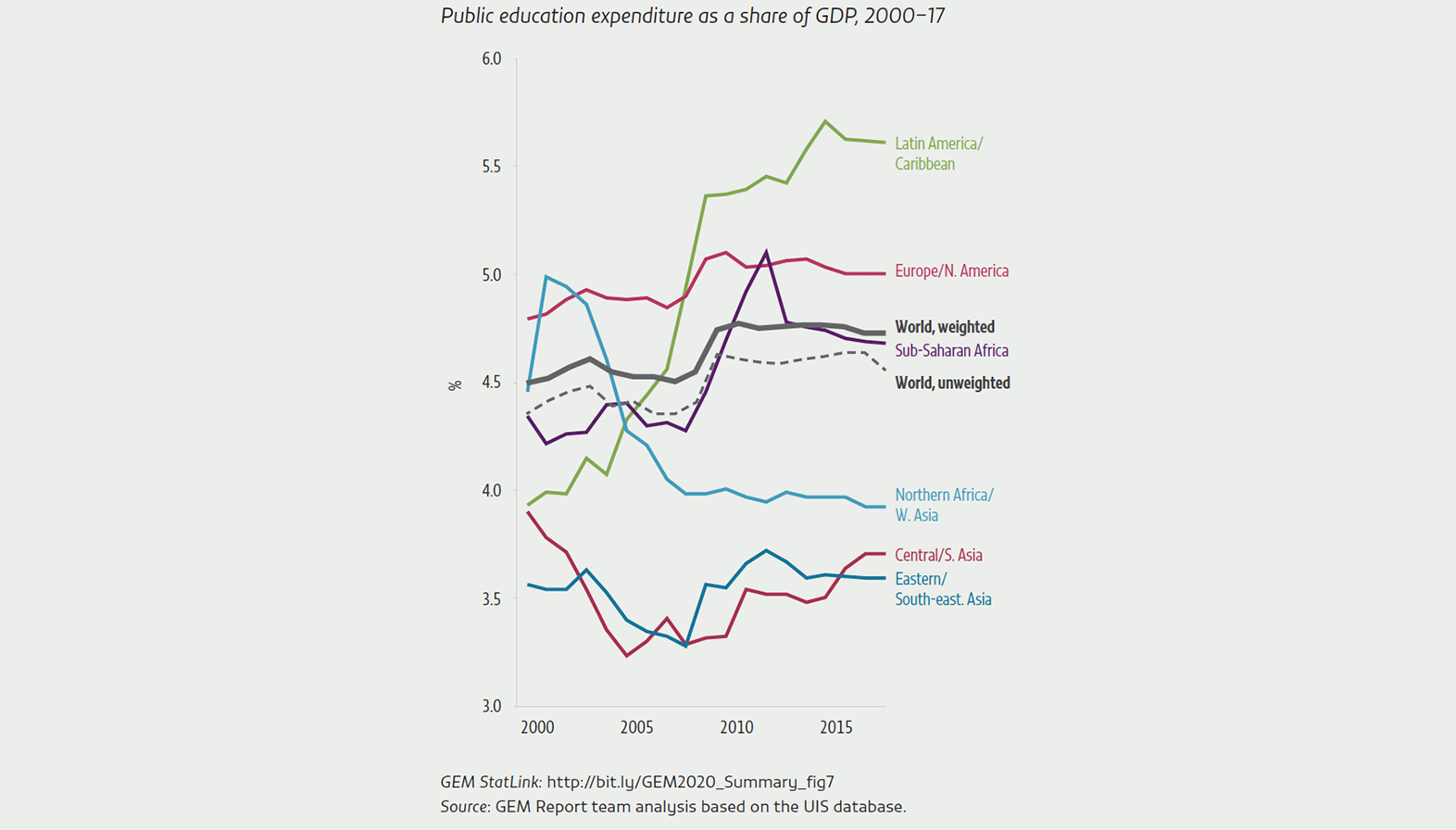