Partnerships are needed to fight unequal gender norms in education

Credit: Tom Merilion / Save the Children

Gender norms shape beliefs about how women and men should behave and determine attitudes and behaviours. While norms can change, those who benefit from the status quo often strongly resist such changes (Harper, 2020a). Girls and women are discriminated against in social, economic and political spheres, with negative effects on their positions and roles in society.

The World Values Survey provides evidence on gender discrimination and the evolution of unequal gender norms. While discrimination against girls and women ranked last among five global problems, after poverty (58%), the environment (12%), education (12%) and health (10%), it was considered the most important global problem by 8% of adults (10% of women and 6% of men), with shares ranging from less than 1% in Japan to 19% in Pakistan.

Undeniable progress has been made in the 40 years since the adoption of CEDAW and the 25 years since the Beijing Declaration. However, more progress is needed. Moreover, women’s rights are being eroded in some countries in the name of a return to traditional values (Roggeband and Krizsan, 2019; UN Women, 2020a). Negative gender attitudes are directed not only at women but also at gender identity and gender expression (Box 7). The United Nations Development Programme’s Gender Social Norms Index, drawing on the World Values Survey, shows that the proportion of people with moderate and intense bias against gender equality increased between 2005–09 and 2010–14 in 15 of 31 countries. The share of men with no gender norm bias increased in countries including Argentina, Australia, the Netherlands and the United States, but declined in India, Romania, South Africa and Sweden. About half of men and women globally believe men are better political leaders, over 40% think men are better business executives and 28% think it is justified for men to beat their wives (UNDP, 2020). 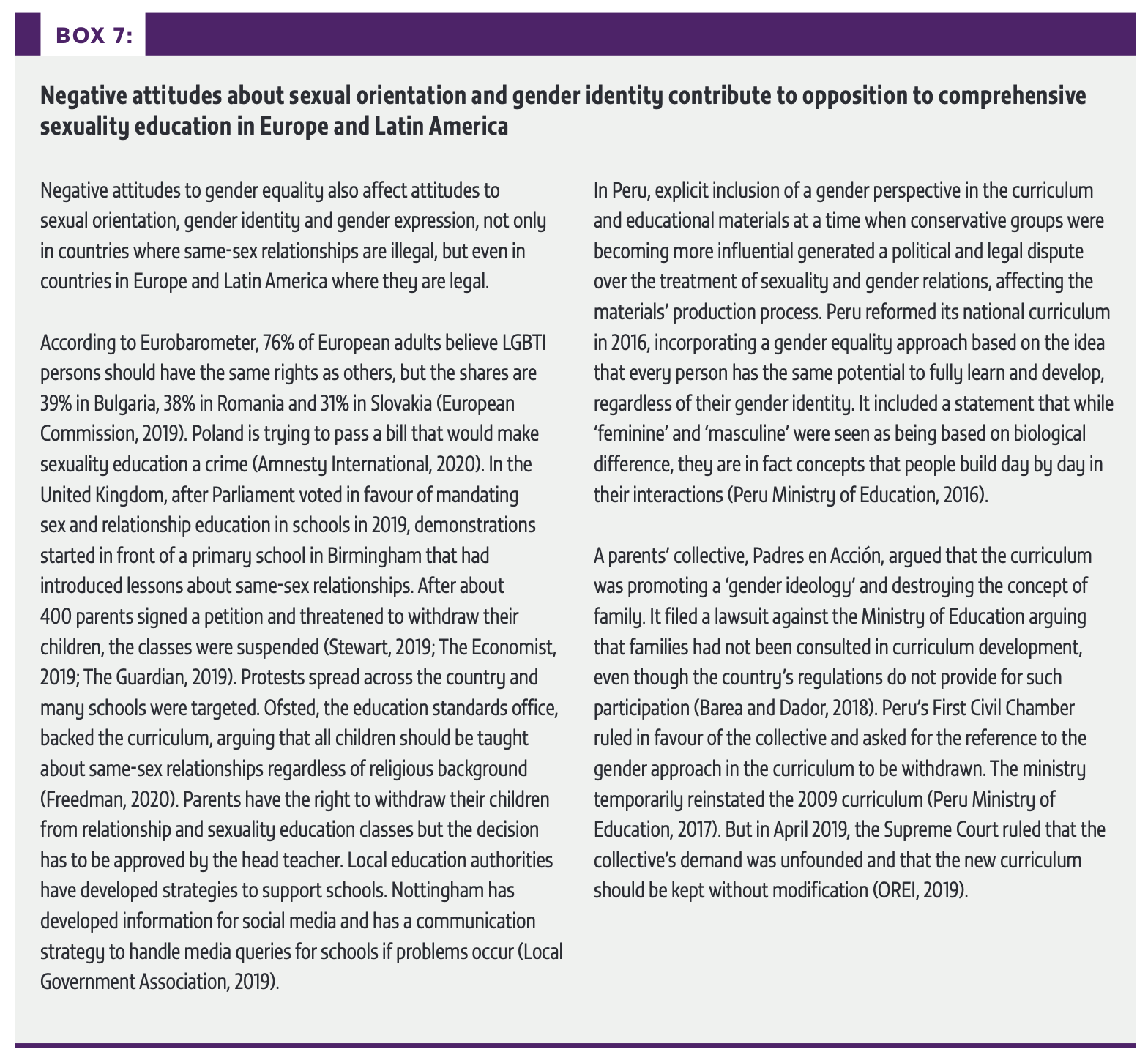 The most extreme form of gender discrimination is sex-selective abortion, which may have led to 45 million fewer female births, mostly in China and India but also in 10 other countries, particularly in the Caucasus (Chao et al., 2019). Attitudes towards female foeticide have not improved with education. In urban India, the male to female child sex ratio is inversely associated with female literacy and female economic activity. An analysis of women’s attitudes in Patna, India, finds that women with lower than tertiary education justify sex-selective abortion based on coercion by their in-laws or husband, while women with at least tertiary education justified it as their own choice, comparing it to family planning (Kumari, 2015). The decline in desired fertility among educated women in India may in fact have increased their desire to have just one child, a son (Jayachandran, 2017).

Social expectations usually assume men should not take on care responsibilities and women should be confined to reproductive roles. In Uzbekistan, 28% of adults think it is not acceptable for a woman to work outside home for pay. In Georgia, 65% of adults reported that children with working mothers suffer. In Azerbaijan, 79% think that when jobs are scarce, men should have more right to a job than women (OECD, 2019d). In Lebanon, 77% of secondary school students said women should work mostly on becoming good wives and mothers and 66% said there were many jobs women should not do (UNESCO and Université La Sagesse, 2012).

Analysis for the OECD Social Institutions and Gender Index assessed the level of discrimination in social institutions in 11 former republics of the Soviet Union and in Mongolia at 24%. One effect of this discrimination is that it reduces women’s average years of schooling by 16% (OECD, 2019d).

Social and cultural factors affect parents’ attitudes to girls’ education (Opoku, 2020). In rural areas of many low- and middle-income countries, girls are expected to get married and take on domestic roles, which impede their education, for instance among indigenous girls in Guatemala and Mexico (Bonfil, 2020). In Sokoto, Nigeria, some parents believed allowing girls to attend secondary school would prevent them from marrying (Onoyase, 2018). In rural Punjab, Pakistan, parents justifying their bias in favour of educating boys said more education would make girls rebellious and inclined to challenge the status quo in society (Purewal and Hashmi, 2015). To change these gender norms, legal institutions must protect girls’ rights and education must provide everyone with opportunities and skills for critical thinking. Whether that happens depends on many factors, including the presence of civil society organizations to promote change, the contexts in which they operate and the strength of stakeholders’ will to effect change (Harper, 2020b). In addition, gender equality champions can provide the impetus for change (Box 8).

I was born in an indigenous community and raised under some gender stereotypes and norms, experiencing several types of violence. Education was to me a way to learn that the world could look different and that I could also help other women and girls for their world to look different.Tania, Mexico

Parental attitudes can also influence children’s career choice. In Germany, parents of high socio-economic status support daughters in choosing TVET or STEM occupations but do not support sons in choosing female-dominated occupations, mainly because the latter tend to be lower paid (Helbig and Leuze, 2012). A survey showed that 10% of parents wanted their sons in technical occupations and 8% in crafts and trades, but only 2% wanted their daughters to make careers in these fields. By contrast, 9% of parents wanted their daughters in office jobs and 6% in medical roles but only 3% and 2%, respectively, wanted to see their sons in these occupations. Fathers want their sons to choose high-income careers with opportunities for advancement but consider these features less relevant when it comes to daughters (Speich, 2014). 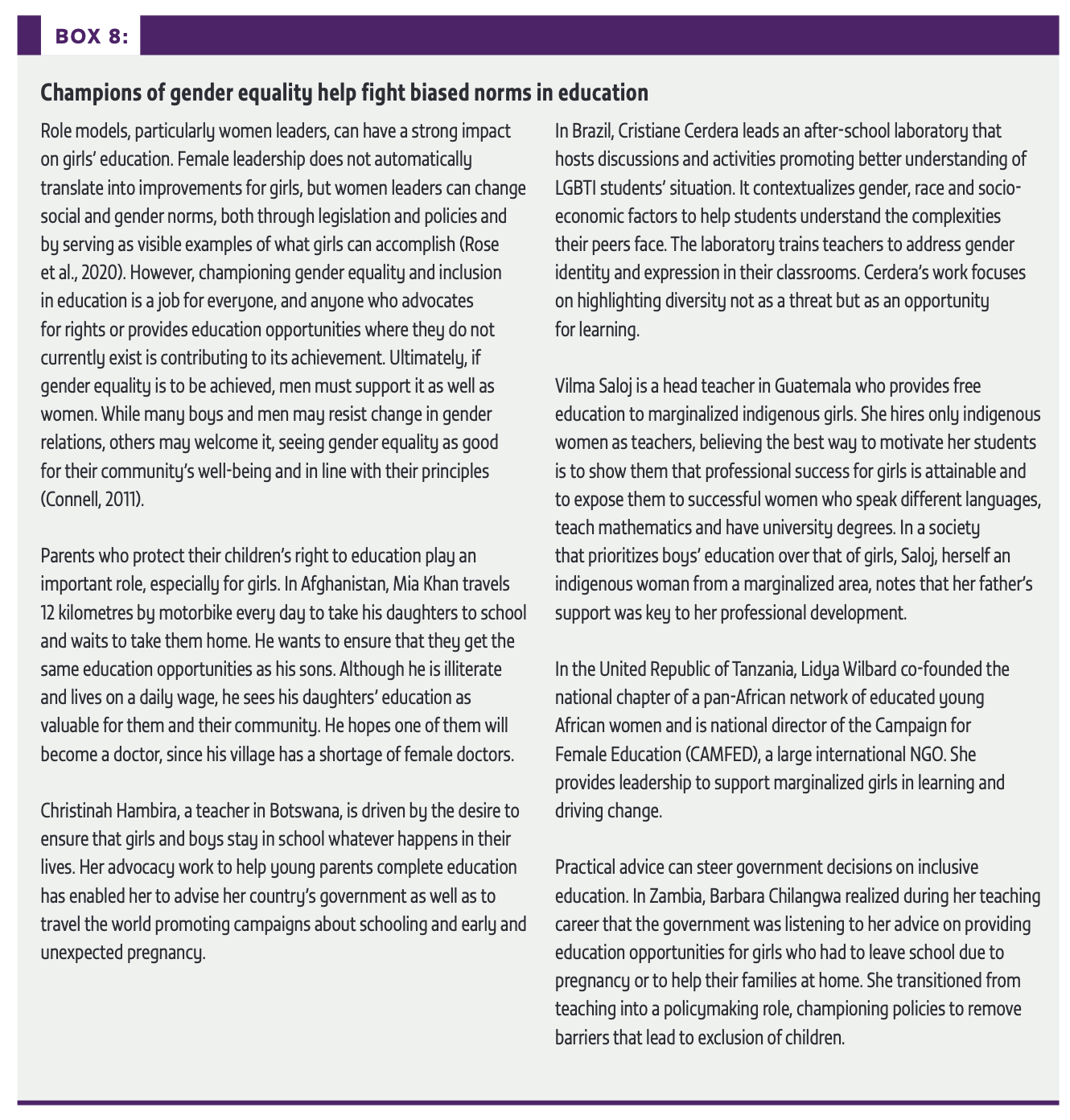 In the United Arab Emirates, women’s tertiary education choices are primarily based on consultation with family and conform with patriarchal traditions (Labib, 2020). Socio-cultural perceptions of appropriate careers generally fall into two main categories: those that are perceived as suitable for women, and those that are valued and highly regarded in society (Labib, 2019). Typically, careers for women align with cultural and religious norms and codes of modesty, allow for work-family balance and are in sheltered work environments. Parents discourage and disapprove of careers involving physical labour and a lot of interaction with men, such as those in ICT and civil or mechanical engineering (Houjeir et al., 2019; Labib, 2019).

Gender norms and parental expectations can also cause boys to disengage from education. In Fiji, parents expect boys to be breadwinners and to assist the family with cash crop farming, an expectation that provides boys with an incentive not to persist with school (Ali, 2020). In Jamaica, boys resist schooling because they consider it a female pursuit. This resistance is sometimes exemplified in a refusal to develop high levels of proficiency in reading, seen as girls’ domain. As one boy put it, ‘real men do not like reading’ (Clarke, 2020).

Gender biases not only proliferate outside school, but are unintentionally reinforced inside education systems through curricula, teaching and learning materials and practices, and daily interactions with adults and peers.

This is one of many stories of girls who are the first in their family to graduate. It was collected by the GEM Report as part of a campaign, #Iamthe1stgirl, aiming to demonstrate progress in gender equality in education since the Beijing Declaration and Platform for Action 25 years ago.